I got paddled last night.  It was a 'serious' paddling and even thought it was relatively short, Cora layed on the paddle with more intensity than ever before.  I am still feeling the sting. 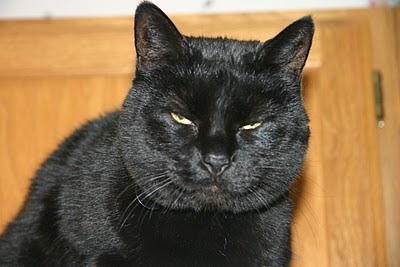 We have a cat (or is it that the cat has us).  Its a pretty, black breed known as a 'Bombay'.  Well, sometimes I 'play' with her.  Unfortunately, she is really Cora's Cat and doesn't really take to me very much.  So, my intentions of 'playing' with the cat don't get received well and Cora accused me of 'teasing' the cat. 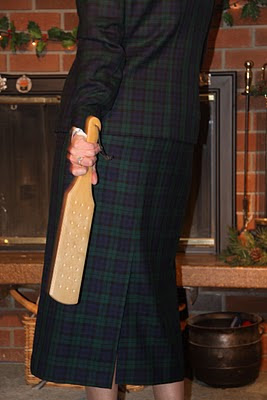 In fact, Cora got rather incensed at what was going on. She had warned me in the past about my attentions with her cat.  And the following happened so fast that it caught me totally by surprise.
First, I found myself spun around and bent over our kitchen table.  Then Cora reached for her 'Spencer' paddle.  After baring my bottom, she layed on some really hard swats.  Perhaps harder than she has ever delivered.  Oh, and no warm up.  Just swat after swat.
I cried out in pain.  Sometimes Cora will 'let up' a bit when this happens.  Not this time.  She just kept delivering intense swat after intense swat.  I was concerned that she might break the paddle, but it retained its reputation as 'indestructable'.  Indeed the result was that I was a well spanked man.

Finally, she let me up.  And it was over and forgiven.  I love that part the best.  And while my bottom was on fire, I knew I had it coming.  But the aftercare is awesome.  I soooooo love this Lady!
On a Side Note:
Thursday marked the one-year anniversary of this blog.  I really had no idea what it would be like a year after starting it, but here we are.  And its been lots and lots of fun.  We have made many, many friends through the blogosphere and found that there is quite a few 'kindred spirits' out there who also enjoy a Female Led Relationship.
So we wish to say Thanks to all of you who have taken the time to read our blog, and especially to those who have been generous enough to leave comments.
Posted by spankedbywife at 2:25 PM 6 comments: 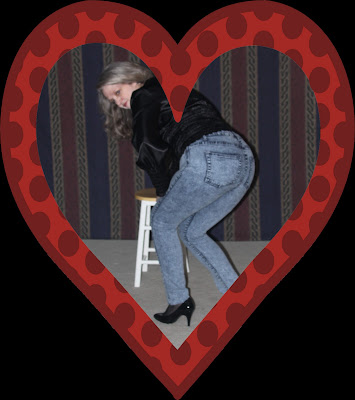 Get plenty of your own
bright-red heart-shapes 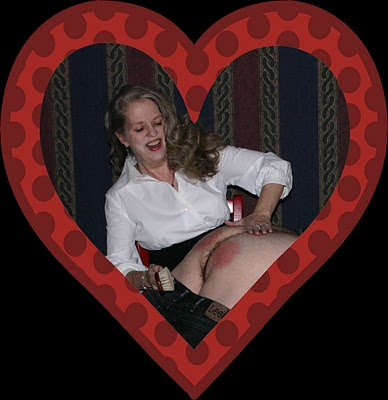 Posted by spankedbywife at 9:37 AM 3 comments: 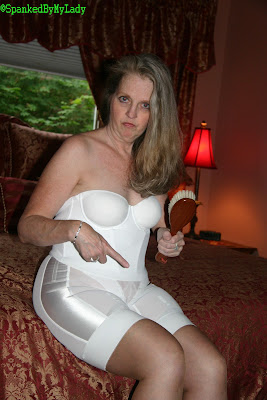 In my opinion there is nothing that symbolizes Female Authority better that a wooden hairbrush.  In the time honored tradition, most households included a hairbrush on M'Ladies' dresser.  Thus it was only natural for her to reach for it when she found it necessary to maintain discipline in her household. 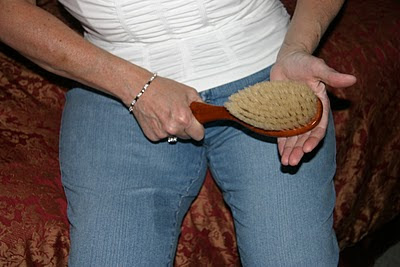 I was lucky enough to have purchased one of these items when Nu-West/Leda was selling them (about 20 years ago, or so).  It seems to be one of the best hairbrushes I have seen and certainly leaves quite an impact when Cora uses it on me.  There was a time that I really hated being spanked with it, then one day Cora had me over her lap and the combination of her strokes and the sound it was making seemed to hit home (pun intended).  Not only was I feeling well spanked (very well spanked!), but also aroused (very aroused).  Since then I can't seem to get enough of her hairbrush.  Fortunately, she likes to use it, too (more on that later).

At one time it seemed that the traditional flat-backed, wooden hairbrush were becoming extinct.  However, I have found that they may be on a comeback.  I have found quite a few examples recently in our local pharmacy. Now, these aren't the plastic brushes or those wooden brushes with some kind of plastic inlay to hold the brushes (and loose much of their weight), but real wood with all the weight that results in solid impact on a naughty bottom.  And I have made a point of obtaining several examples (for scientific purposes, of course!).  I also found them to be very affordable (often less than $10.00).

A while back I saw a particularly large example and I guess its really a 'bath brush'.  Its something that Cora had not used very much.  I think she likes to stick with tools with which she is familiar.  Sort of a comfort level.

Well, a couple of days ago, I decided to take some pix of our hairbrush collection and set them up on the bed.  Included in the line-up was the large brush.  Cora decided that she wasn't going to let the opportunity pass her by and after I had all the pictures I needed, she issued the instruction, "Over my Lap!" 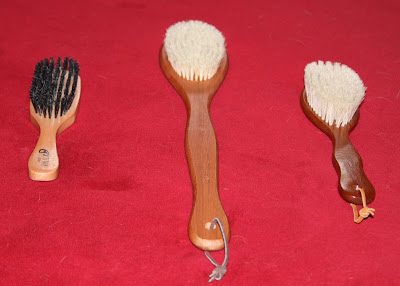 Of course, I complied.  After there is nothing better than a spontaneous spanking from Cora.  There was no particular reason to get spanked other that 'she wanted to'.  Again one of my favorite scenarios as it comes under the heading of a 'fun spanking'.  Fun for both of us! 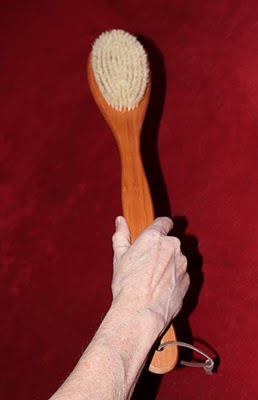 I expected that she would pick up the Nu-West/Leda hairbrush.  Instead, much to my surprise, she reached for the longer 'bath brush' and started to spank me.  I could tell that this was different as it was quite intense.  Cora told me she really liked this brush and would probably start using it more often.  She related, "its more spank with less effort on my part".  Needless to say, when she was done my bottom was very red and stinging.  I certainly felt an afterglow for the rest of the day. 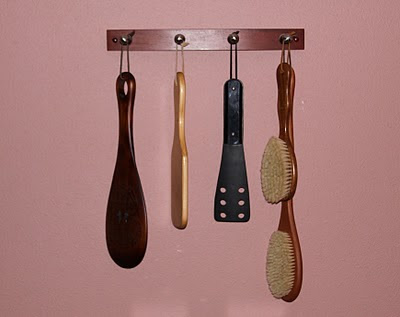 So now Cora's 'Bedroom Rack includes a new member.  And I expect it won't get lonely.  In fact we actually have a pair of these 'weapons of ass destruction'.  I guess you never know when another Lady may show up and need one, too. 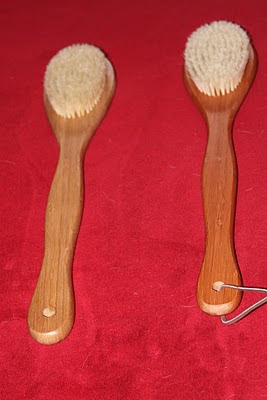 As I am finishing up this post, I shared with Cora just how aroused I was revisiting that spanking.  "Well, then maybe I should give you a refresher".  She then grabbed my arm and led me to the table where she bent me over and bared my  bottom.  She then utilized about half her 'Rack' and again left me with a red, stingy bottom.  And as I finish this post, I certainly am enjoying the afterglow. 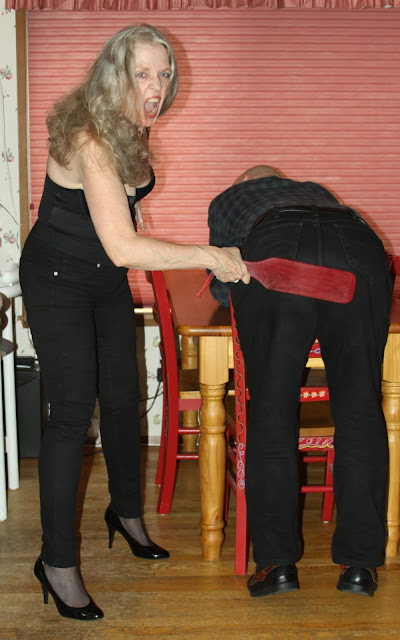 Oh, how I love being under her spell!
Posted by spankedbywife at 3:52 PM 9 comments:

I went to the dentist yesterday.  It was necessary to replace a crown and the appointment was for the preparation.  Sitting in the chair, I found it more pleasant if I let my mind wander to thoughts of my Lady and her spanking me.

Now, don't get me wrong, I do appreciate the strides of modern dentistry.  And I finally figured out that its much less painful if the dentist if female.  Being hovered over by two delightful women (the dental assistant is also female), isn't all that bad.  Then there is the aspect of being 'under their power'.  Its not exactly a 'sexual' thing but I think you know what I mean.  Oh, and by the way, my dentist is a really nice woman and is one of the more gentler dentists I have had experience with.

However, much of what happens during one of these processes hurts.  I especially hate the 'needle' when being given anaesthetic.  And after a while, holding ones mouth open can get painful, too.  And when the anaesthetic wears off....  Well, its nice that there are pain meds.  (BTW, I am composing this prior to taking some as I remember the disaster that occurred with one of my September posts that was made while under the influence of the pain meds). 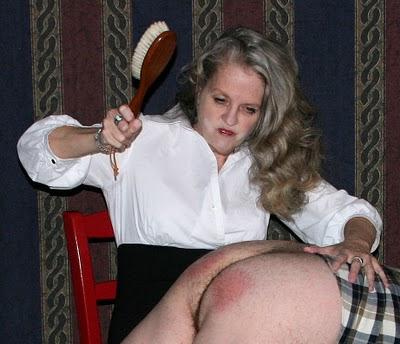 So why is it that the pain is different when I am spanked?  I can't answer that, other than there is sexual energy flowing like crazy.  And I know that many of the men who either blog or keep in touch through e-Mail, have different aspects about being spanked by their ladies.  Many speak of the 'excitement' both before and after a spanking, but hate the actual spanking, itself.  On the other hand, I rather enjoy the process of submitting to my Lady, presenting my bottom for chastisement and letting her wail away at me.  I find that if I concentrate on my breathing, things can actually be pleasant (unless, of course, I am being spanked as a result of displeasing Cora).  Especially when I reach that 'plateau' when the endorphins kick in. 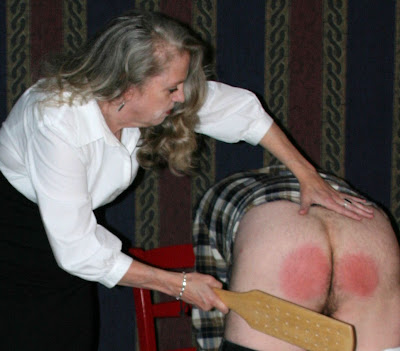 (Hmmm, now just where did I put those 'Request For Discipline' forms?)
Posted by spankedbywife at 12:55 PM 3 comments: