Its been rather quiet around here and we have been occupied with quite a few things outside the FLR realm.  However, last night presented an example of our FLR in action.

Cora and I are both rather passionate about cooking.  We both have our own ideas on how things should be done.  And sometimes these ideas provide conflict between us.  Last night that happened.

I won't go into the details, but our discussion started to get a little 'heated'.  I can get rather stubborn and Cora is also one to hold her ground.  All of a sudden I heard her say, "Over to the table and bend over!". 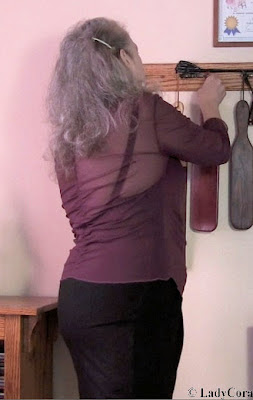 Oh, oh!  It was then that I realized our 'heated' discussion was going to migrate to my posterior.  Realizing that it was time for me to back down, I complied.  Cora grabbed one her paddles off her rack. 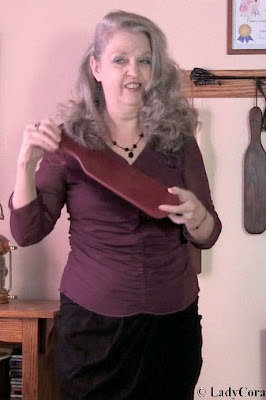 I was thinking that her paddles may be just a little too accessible.

Soon I felt the heat of her paddle.  She spanked rather swiftly and wasn't holding back much.  I felt lucky that she let me keep my pants on.  Soon she let me up.  I thought it was over.


NOT!
Cora then decided that the second half would be on the bare.  "Drop 'em", she instructed.  Again, I complied and repositioned myself over the table, presenting my naughty bottom for her to punish. 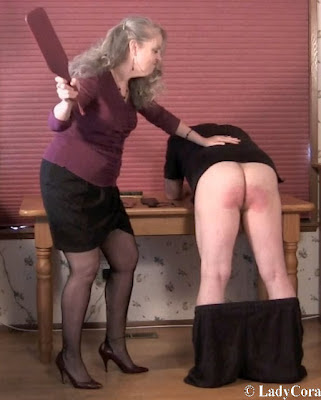 And punish, she did.  She had switched to her PurpleHeart paddle.  Now that paddle is rather heavy and packs quite a wallop.  I was soon reminded just how much of a wallop it did pack.  After lighting me on fire, she replaced the paddle on the rack.  However, she did not instruct me to get up and I knew enough to keep in position.  It was my intent to submit to whatever she had decided to deliver. 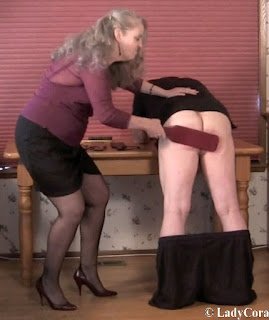 Cora next reached for her Black Delrin Twisted loop.  This is a rather evil device that the good folks at Cane-iac came up with.  It consists of a quarter inch thick length of round delrin double wrapped into a loop and held by a handle.  It looks 'innocent' enough but if you are ever on the receiving end of one of these things, I can only hope your Lady hold back a bit in sympathy for what it can do to an exposed bottom. 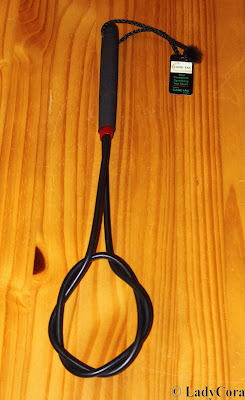 Finally my punishment was over and I apologized.  We finished dinner preparation and I put the Mel Brooks movie, "Spaceballs" on the player to watch.  It was a great mood changer and we both rolled in laughter while watching it.

This morning I asked Cora if she felt better last night after applying a dose of discipline.  She responded that indeed, she did and that once it had been administered all was forgiven.

I love it when things work the way intended!
Posted by spankedbywife at 1:49 PM 11 comments: