I have noticed quite a few new blogs appear that address Female Led Relationships.  I have spent a little less time 'on line' in the past few months so have gotten a 'little behind' in my reading.  However, I have found that many others whose blogs I follow, have included many new blogs.  Some are authored by women.  To all these new bloggers I extend a hearty 'Welcome'.  I hope to add a few to our 'list of blogs we follow'.

Sadly, there have been a few blogs that have disappeared.  I understand that there may be legitimate reasons but hope that some of them may re-appear when their Muse returns.  I miss many of them.

Speaking of blogs, I'd like to recommend that you check out James' blog, 'spankedmale'.  James' latests posts includes three videos of him getting spanked by his wife and a friend.  I know how excited I was the night I got spanked by two wonderful Ladies and how many men have this as a fantasy.  Anyway, James has provided videos of the event and placed them on his blog to share with you.

Also, during the summer I experienced problems posting comments on some of the other blogs.  Finally, I found that if I changed the settings on my browser regarding 'Cookies' this problem cleared up.  In my case (Internet Explorer), I went to 'Internet Options' under 'Tools' and clicked on the 'Privacy' tab and lowered the settings.  I plan to raise the settings after posting my comments to protect things as much as possible.  If you have the same problem, hopefully this suggestion will help.

Speaking of comments, I wish to thank all who have left comments.  Joeyred51 made a reference to Cora's paddle with our local University's color (Purple).  I guess they got an effective paddling last week.  Oh well, Seattle is not really that much of a sports town.  Good thing there are so many other things to do here.  Mysster also made a reference to Seattle.  Yep, we love it here.  James (yes, the same one mentioned above) and SometimesSpanked made reference to Cora's attire.  She loves to dress up and often she wears tight girdles underneath her skirts or jeans.  I have mentioned it before, but I love to follow her up the stairs.  And to receive a complement of 'stunning' from such a stunning woman as Dana Kane was an honor.  If you haven't already done so, check out her blog.  She has generously shared many of her videos.

And then there were the comments from bobmski and Hermione asking for pix of me in my butler's uniform apron.  I guess this comes under the heading of  'be careful what you ask for'.  Both Cora and I laughed out loud after reading these comments.  So, we will be working on a photo session which will hopefully fulfill these requests.

Oh, and speaking of uniforms, this is the Halloween (Samhein) season.  This provides a unique opportunity for the Ladies of a FLR.  There are many costume shops showcasing all kinds of 'costumes'.  However, you have considered forms of 'feminization', you might look at some of the 'French Maid' costumes.  Some are available in 'larger' sizes which will probably fit your men.  Something you could have your guy wear while doing his 'chores'.  Just ask Cora. 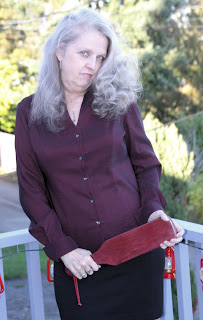 This post has been a bit rambling.  So here is a picture from our outing last week of Cora holding her PurpleHeart paddle.  Perhaps she will be inspired to use it when we do our butler uniform photo shoot. 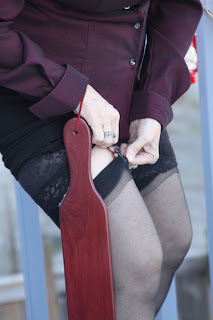 And one for the fans of Cora's stockings.  Here is a pic of her adjusting one of them.  After all, as was said by a woman who used to sell girdles on line, a big part of wearing girdles and stockings is adjusting them.  I heartily agree and as the lyrics from ZZ Top,  'I'm a fool for her stockings, I believe'.
Posted by spankedbywife at 1:04 PM 5 comments:

October in Seattle often features darkening, cloudy skies often with rain and wind.  However, every so often, the clouds part and the Goddess provides one of those spectacular days that seem so few for this time of year.  Today was one of those days.

So, I told Cora that I would put the battery charger on the Corvette (it doesn't get much use, so the batteries usually need a kick before I can get it started) and take her out to lunch.  Her choice was 'Salty's'.  One of our favorite restaurants is 'Salty's'.  Its close to us and features great food and one of Seattle's most spectacular views. 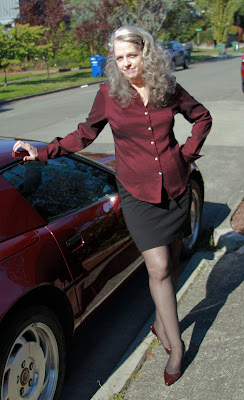 Cora dressed up for the occasion and wore a nicely tight skirt along with heels.  These are the heels that match the car.  I think the pictures will show what I mean. 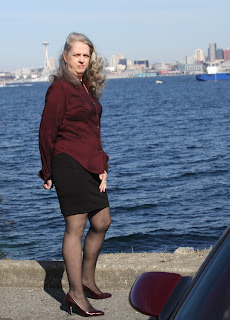 Once we arrived, we took a short break and took in the view.  Yes, that's a blue sky and the famous Space Needle in the background.  Yikes, its been almost 50 years since the 1962 World's Fair! 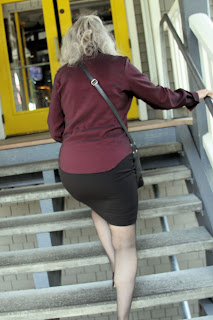 That's Cora climbing the stairs to the restaurant.  Oh, how I love to follow her up the stairs! 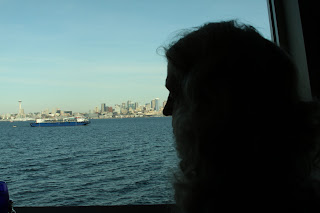 The view from inside the restaurant is just as good as it is from the outside. 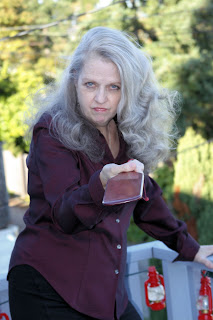 So, what does all this have to do with our Female Led Relationship?  Well, not much.  But when we got home, I asked Cora to grab here Purpleheart Paddle and head for our deck for a picture or two. 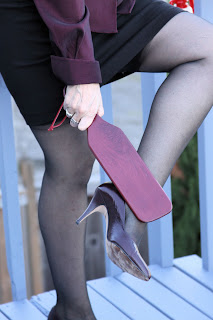 After all, don't you think a Woman should be color coordinated?
A little later I couldn't resist.  I have an apron that looks a little like a butler's uniform but its open in the back.  I put it on (and nothing else) and proceeded to make Cora's evening cocktail.  She remarked that she enjoyed her bare bottomed bartender.  Once the drink had been served I grabbed one of her hairbrushes and followed her to the couch.  I had her sit in the middle, handed her the hairbrush and placed myself over her lap.  Keep in mind that my bottom was already bared.
She proceeded to start with a very nice hand spanking followed by a firm spanking from her hairbrush.  Its been a while since Cora has delivered a firm spanking and even longer since she has left blisters.  Well, I am sitting rather uncomfortably while writing this as she did leave me with a blistered and hot bottom. 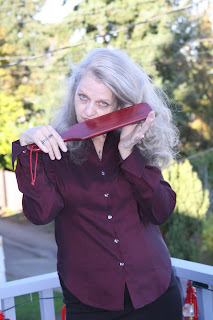 I think these are my favorite kinds of spankings.  And I love her very much.﻿
Posted by spankedbywife at 6:22 PM 8 comments:

The Need for Spanking - The Results

First, I want to thank those who left comments on our previous post.  With a lack of posting for over a month we were afraid that no one would be watching our blog.  Instead, there were 5 who commented within a day.  Thanks James, Dana, JoeyRed, Tom and one anonymous commenter.

Well, usually things don't work out like we expect.  And yesterday morning was no exception.  When Cora came downstairs yesterday morning, she sort of laughed at the strategically located chair with the hairbrush conspicuously placed on the chair back.  Then she announced, "I want my coffee!". 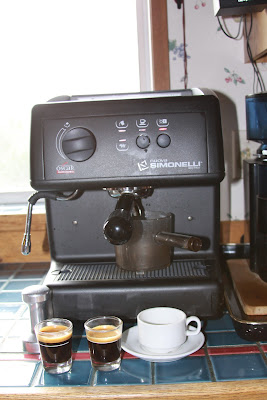 Now, we do live in Seattle and fit right in with the population of coffee drinkers.  And we take our coffee rather seriously.  And when I mention coffee, I should clarify: its really espresso.

I discovered espresso in the mid 1970's and purchased my first espresso maker in 1977.  Over the years I have worn out several machines and have learned lots of the tricks to make a pretty good espresso along with the variations such as Lattes etc.

So I abandoned my hopes of Cora taking me over lap and applying the hairbrush and instead became 'Mr. Barista' and began to make her morning espresso concoction.  She likes an unusual combination of equal parts espresso and coffee creamer topped off by whipped cream (the kind that comes from a can).  As I served her, she mentioned that she would take care of me later.

Later in the morning, Cora returned to the kitchen and dragged me over to the table, grabbed her leather paddle, bent me over and delivered about a dozed rather firm swats.  I thought that was it for the day.  NOT! 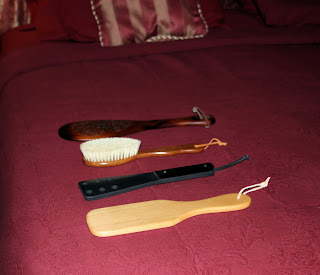 That afternoon, Cora layed out her 'Bedroom Rack' and beckoned me into the bedroom.  Soon she had me if her favorite position with me bent over her left leg and then placed her right leg over my legs.  Its that position where I wasn't going anywhere.

Cora likes to use a variety of implements when she delivers a spanking.  And this was no different.  She started with her hand, then shifted to her hairbrush, small paddle, the SMTR paddle, and Ferule.  Now, since it has been a while since I had been spanked, my bottom was more sensitive than it usually is when she is spanking me on a regular basis.  So, needless to say she had me lit on fire.  Indeed, after she was done I felt like a well spanked lad. 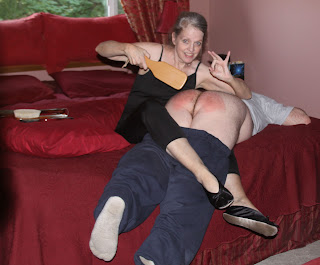 I thought that that was the end of it.  NOT!  When we retired for the night, Cora asked me to show her my bottom as she indicated she wanted to 'inspect the results'.  Of course, I complied and crawled up onto my knees and turned around so that she could see the results of her previous handiwork.  However, instead of feeling just the cool air of the evening, she landed about a dozen spanks with her hand.  I turned around and viewed a very evil grin on Cora.  I do love her and love her playfulness.
Posted by spankedbywife at 10:57 AM 6 comments:

The Need for Spanking

Its been a while.  Perhaps you have noticed that we haven't posted much lately.  Well, that's mostly a result of not much happening in our Female Led Relationship.  I guess you could say that for us, life has gotten too 'normal'.

Most of the men in FLR's have made it known that there is a deep-seated 'need' to be spanked by their Ladies.  I am no exception.  And when that need goes unfulfilled, the need sometimes builds.  Sure, sometimes Cora will give me a impromptu slap on my bottom and she has even taken a paddle off her rack for a few well placed swats.

However,  I feel very overdue for a much more 'formal' bare-bottom blistering from Cora's Hairbrush.  There is something very intimate about being taken across her knee for a session with her hairbrush.  I can't really describe it other than to say that right now I definitely feel the need. 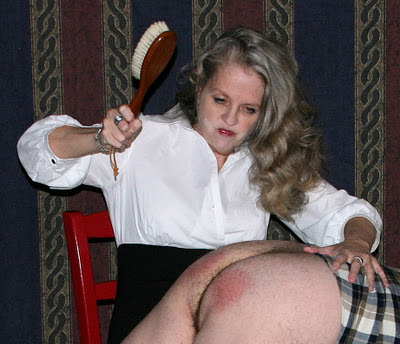 So I am going to set up something.  I have placed one of our straight backed chairs in front of our dining area table and have placed one of her hairbrushes conspicuously on it.  (The picture below was literally taken minutes ago). 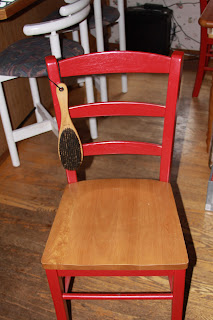 My plan is when she comes down from the bedroom this morning, she will 'catch' me doing something naughty.  My hope is that she will get the idea and sit herself down and haul me over her lap for a good dose of the hairbrush.  And I know it will be good for her too!

I'll let you know what happens.
Posted by spankedbywife at 10:51 AM 7 comments: