However, one day while browsing the internet, I noticed a picture of Ms. Dana Specht holding one of the OTK Spanking Paddles.  I figured that the OTK Spanking Paddle would have been made from the same wood used for the Spencer Paddles and with the correct proportions could make a reasonable reproduction.  But first I sent off an e-Mail to Ms. Specht asking for the basic dimensions hoping that she would respond.
And respond she did.  She sent me an actual tracing of her original paddle.  Wow!  With her tracing,  off to my workshop I went and made a template.  I then began cutting out several copies from a sheet of plywood.  Both the OTK Spanking Paddle and the Spencer paddle are made from 3/8 inch thick, 7-ply birch plywood. I found a small sheet of it at our local woodworking store.  I sent two of my first results of the OTK Spanking Paddle to Ms. Specht.  It was the least I could do in return for her generosity in providing a tracing.  She responded that my copies were exact duplicates of the originals.

Later, she asked if I would be interested in making a number of paddles for her to sell.  At first I hesitated but later thought that it might be fun to contribute to the world of women spanking their men.

The first group was sent off in May, 2013 and were quickly purchased.  Another group was sent in late July and another in September.  And I just completed what will probably be the last group which were sent off about a week ago.  A total of 18 OTK Spanking Paddles and 15 Spencer Paddles were made.  At this time there is a very limited amount in stock.  So if you have ever wanted one of these classic Nu-West/Leda style paddles, now is the time.  Just log onto Ms. Specht's website (DanaSpecht.Com) and navigate to the 'Store' button, then 'Paddles'.

Prior to composing this post I thought it only appropriate for Cora to remind me what its like to take a paddling from both the OTK Spanking Paddle and the Spencer Paddle.  And in honor of Ms. Specht, I fetched our copy of the video she did for the Disciplinary Wive's Club on scolding.  Its an excellent video that demonstrates Ms. Specht's famous scolding style along with examples of her spankings, too.

I put the disk in our player, pulled one of the OTK Spanking Paddles and one of the Spencer Paddles off Cora's rack and presented myself to Cora for a paddling.  Over her lap I went and Cora began spanking me with the smaller paddle.  Cora loves to spank along with a video, especially Ms. Dana's scolding video.  Cora will match Ms. Specht swat for swat and I endured about 13 minutes of solid paddling.

Cora then beckoned me to get up and traded her OTK Spanking Paddle for the Spencer Paddle.  "Bend over and grab your knees", she ordered.  I complied and was then on the receiving end of about 15 of her best.

Oh, and I am sure you are familiar with Ms. Specht's spanking abilities.  Her website introduces her as a "World Renowned Disciplinarian".  That's probably an understatement.  If you have seen any of her videos (and I'd highly recommend checking out her website where she lists many of them) you know that she is perhaps one of the most intense disciplinarians on the planet and spanks quite hard.  I fondly remember the first time I put her DWC video in our player and draped myself over Cora's lap.  Watching Ms. Specht spank really inspired Cora to keep up with her.  It was truly a breakthrough in Cora spanking me good and hard.

Ms. Specht has graciously shared some pictures of her spanking Ms. Sarah Gregory, who I'm sure you are familiar with, also.  I think the pictures speak for themselves as to the intensity of one of Ms. Specht's spankings.  Note especially Ms. Gregory's expression in the last two pictures. 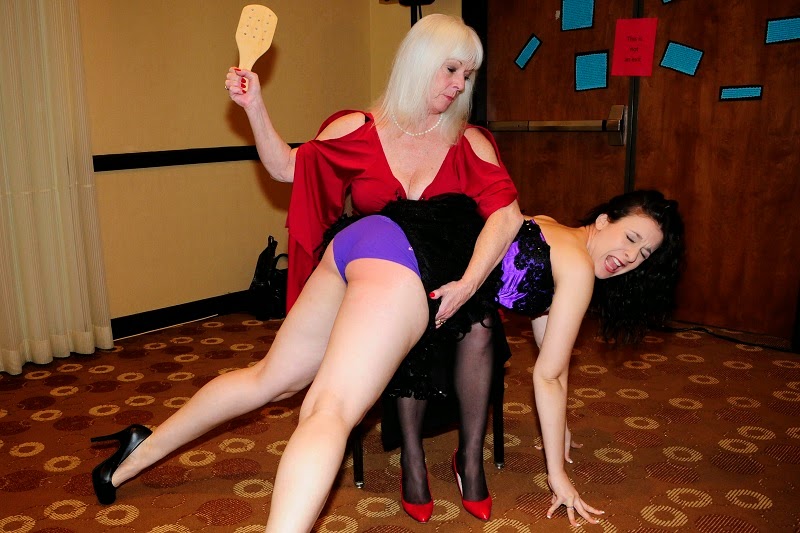 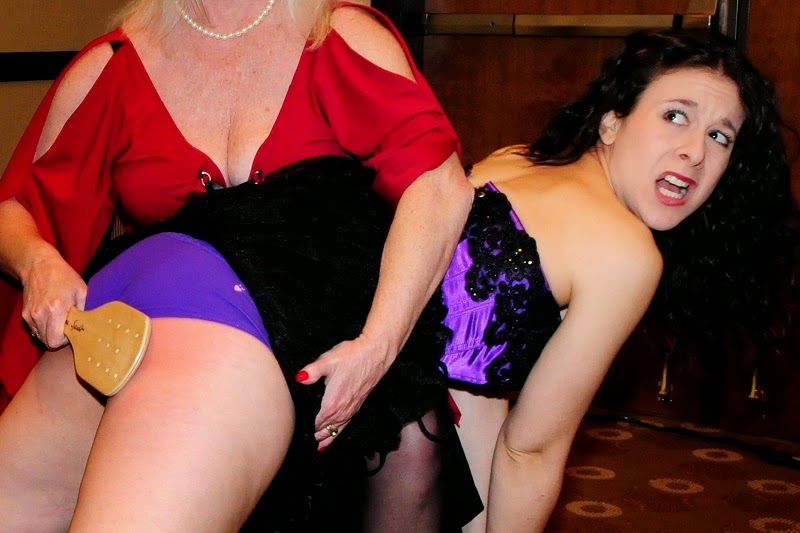 Posted by spankedbywife at 2:18 PM 2 comments:

In our last post we mentioned that we had been feeling the heat.  Well, today we found out that July & August, 2014 were the hottest on record for Seattle.  Yes, we here in the Pacific Northwest are weenies when it comes to hot weather but Cora and I are both relieved that the weather is changing to its fall orientation.  Whew!

I had planned a post about Cora's new Spanking Chair several weeks ago.  In fact there are several things I'll be posting that have been swirling around in the notebook of my mind.

It was a post on April 8 that we described a new chair that we expected Cora would use for the purpose of spanking me.  We even described how she sat down in the chair in the store and took me over lap to determine if she would like the chair.  She did and we brought it home.  Its taller than a normal chair which we thought would make an OTK spanking a little more interesting.  The chair was featured in several posts subsequent to the April 8 post.

However, after getting used to the new chair, Cora and I both came to the conclusion that its just a bit too tall and a bit uncomfortable.  So off we went to the same store.  We found a really elegant teak wood chair that was not as tall.  Again, over Cora's lap I went and she really liked the position.  How we didn't get caught in that position (twice), I don't know.  However there was something titillating about the possibility of getting caught.  Sort of like having sex in a public place.  (You have tried that, haven't you?)
Anyway, we took the chair home and Cora put it to use.  She really likes it, not only for a classic Over-The-Knee spanking and like the previous Spanking Chair, it has a gentle curve that accommodates Cora's own curves.  And it looks really nice in our living room.  Oh, and our first 'Spanking Chair' still holds a place of honor sitting just below Cora's rack and is certainly available for 'action' if needed.  I think Cora loves having the choice.

The spanking only lasted a minute or so but it was great to get back into the saddle.  So to speak!  As I am composing this post I'm still feeling the sting.  Its a nice reminder that I have just been spanked, something I have missed.  I'm guessing there will be much more to come.

And Ms. O, you needn't worry about me getting regular discipline sessions but we do appreciate your suggestions and hope you will continue to add your wise comments.  Cora has promised that they will resume.  Perhaps not as intense as the ones you deliver but I know she will keep me reminded of my place.
Posted by spankedbywife at 9:27 AM 5 comments: