Spanked For Inappropriate Cell Phone Use

But Wait!  I don't even use a cell phone!

Here is the story:

Yesterday Cora suggested that we take our three pups to the beach for a walk.  We live just a few minutes from an area that is quite nice this time of year and there is a walkway for a considerable distance along the shores of Puget Sound.

So we packed up the 'girls', three very sweet English Springer Spaniels and headed out.  Once there we attached our leashes and Cora took 'Vixen' and I took 'Devi' and 'Gypsy' on a double lead.  Then off we went. 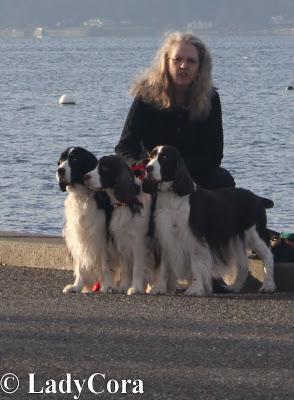 There is an area along our path that includes a number of benches and a community gathering center.  Its sort of the focal point of the area and on weekends there are lots of organized activities taking place there.  However, yesterday it was nicely quiet.  Or so we thought.

A man was sitting on one of the benches but it was perhaps 30 yards away from the route we were taking at that location.  He was engaged in a conversation on his cell phone and seemed oblivious to his surroundings.  Sitting next to him were his two dogs.

The rules of the City require dogs to be on leashes.  In fact he was complying with the rule but rather than holding on to the leads, he had them held under one of his feet, not exactly secured.  You can probably guess what happened next.

Now, our dogs are quite docile and they play well with others; both human and canine.  In fact children love to come up and pet them and they usually return the favor with a swipe of their tongues and a wagging tail.  However one of the dogs sitting with Mr. Cell Phone decided to charge our 'pack'.  Naturally, Mr. Cell Phone's method of securing his leashes did not hold and quickly we had two dogs coming at us.

Cora is a natural 'whisperer' when it comes to animals.  She grew up around horses and actually tamed several of the 'trouble makers' at one of the stables near when she grew up.  And for a time she groomed dogs professionally.  Even the naughty ones.

So it was absolutely amazing to see her kick into 'prevent mode'.  She shouted at the top of her voice, not so much for what she said but to get the attention of the aggressive dogs.  They immediately stopped and what could have become a bad situation quickly came under control.  I am sure Mr. Cell Phone was wondering why Cora was yelling at his dogs as he seemed to not notice that his dogs had escaped his grip and were attacking our girls.  Instead he was still talking to whomever was at the other end of his conversation.

When the dust settled and we continued on our walk, I could tell that Cora was probably still under the influence of an adrenaline rush.  And she was quite upset and incensed at the rudeness of Mr. Cell Phone, not to mention his total incompetence at being a responsible pet owner.

As we continued our walk a gentleman who had witnessed the whole thing injected some (very needed) humor by remarking how you have to watch for those 'attack spaniels'.  We both broke out laughing and I think Cora had calmed down.

Well, calmed down enough to complete our walk.  As the evening proceeded I could tell that Cora was still upset and frustrated with the events of the afternoon's encounter with Mr. Cell Phone.  I know one thing that would help vent her frustration.

However, before I could be proactive, Cora moved to the center of our couch and grabbed hairbrush and small OTK Spanking Paddle which hangs from a peg on the table next to the couch.  Next she beckoned me over her lap. 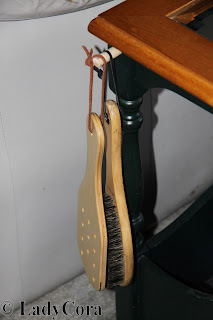 Naturally I didn't hesitate and quickly placed my self in the classic OTK spanking position.  Next she bared my bottom by pulling down the shorts I was wearing.  Then she started to relieve her stress.

To say that the beginning of my spanking was a warm up might be a stretch.  She landed about a half dozen slaps to my bottom with her hand, then switched to one of her implements. 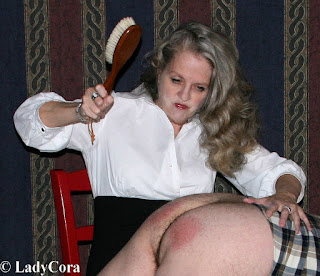 I'm not sure which one she started with.  Her hairbrush and OTK Paddle are actually quite similar.  The Hairbrush weighs only about 1/3 of an ounce more than the paddle but the paddle has a bit more surface area.  After switching off one or two times, she exclaimed, "I sure like this Spanking Paddle; its one of my favorites."  She then stepped up the spanking and her OTK paddle was landing with a quite pronounced 'Pop'.  I think she was using the wrist snap technique as the impact was quite pronounced - both in its affect on my bottom and in the audio response. 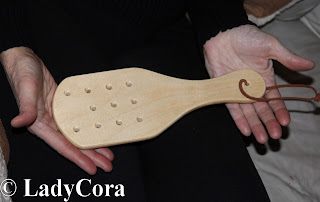 Cora is quite accomplished at 'modulating' her spankings.  She knows how to read me and often seems to hold back just a little, especially when she is administering a 'good boy' spanking.  However, as she was vicariously paddling Mr. Cell Phone, (and perhaps with her inhibition level dropped by a couple of evening cocktails), she was really letting me have it.  I think I could even detect a slight whistle as the air passed through the holes in the paddle as it descended towards its target (me).

Finally, Cora stopped.  Her frustrations had been defused and transferred to my (now) stinging bottom.  I am still feeling the sting today as I am writing this and there is still some redness.  Indeed Cora had administered a good, hard spanking - to me direct and symbolically to Mr. Cell Phone.

And I know she enjoyed it too!

Posted by spankedbywife at 4:10 PM 5 comments: