Since I have written about our 'Notice of Discipline' form in our previous post and also uploaded a picture of it to my profile area of FetLife, I have received over a half dozen requests for copies.  There has also been a number of comments added to the picture of it on FetLife.  One of those comments really intrigued me.

The comment left by one young woman said, "Dare we ask what 'petticoating' is?"  Obviously she had looked closely at our Notice of Discipline form, specifically in the 'Discipline Recommendation' area of the form where one of the check box options is 'Petticoating'.

It appears that the term 'Petticoating' is just not used much any more.  In the early days of Nu-West, I had seen it referred to often.  In fact they offered a publication, "A Complete Guide To Petticoat Punishment" in their Catalog Number Four.  This Catalog was the first one I received from Nu-West and is one of my prized possessions.  It is interesting to note that this publication did not show in Nu-West Catalog Number Five or Six (that's as far as I looked).

On page 35 of Catalog Number Four is a description of the Complete Guide.  Included in the description is "A must for the dominant wife or girlfriend who discovers that SHE is in charge".  The price was a mere $5.95.  I purchased a copy.  I am not sure of the publication date of the Catalog but included on the page that described the Complete Guide is an announcement, "Publications Available October 1, 1982".  That sounds about right based on my memories.  But that makes it well over 30 years ago.  Oh, and as an insert to Catalog Number Four was an advertisement for 'Pamela Peterson's Punishment Panties'.  Note the caption, "Husband or boyfriend been a bad little boy?  Spank him soundly and then put him in these pretty punishment panties for the rest of the day."  Funny that there doesn't seem to be a price.  But it does seem that Petticoat Punishment was a big focus in the early days of Nu-West. 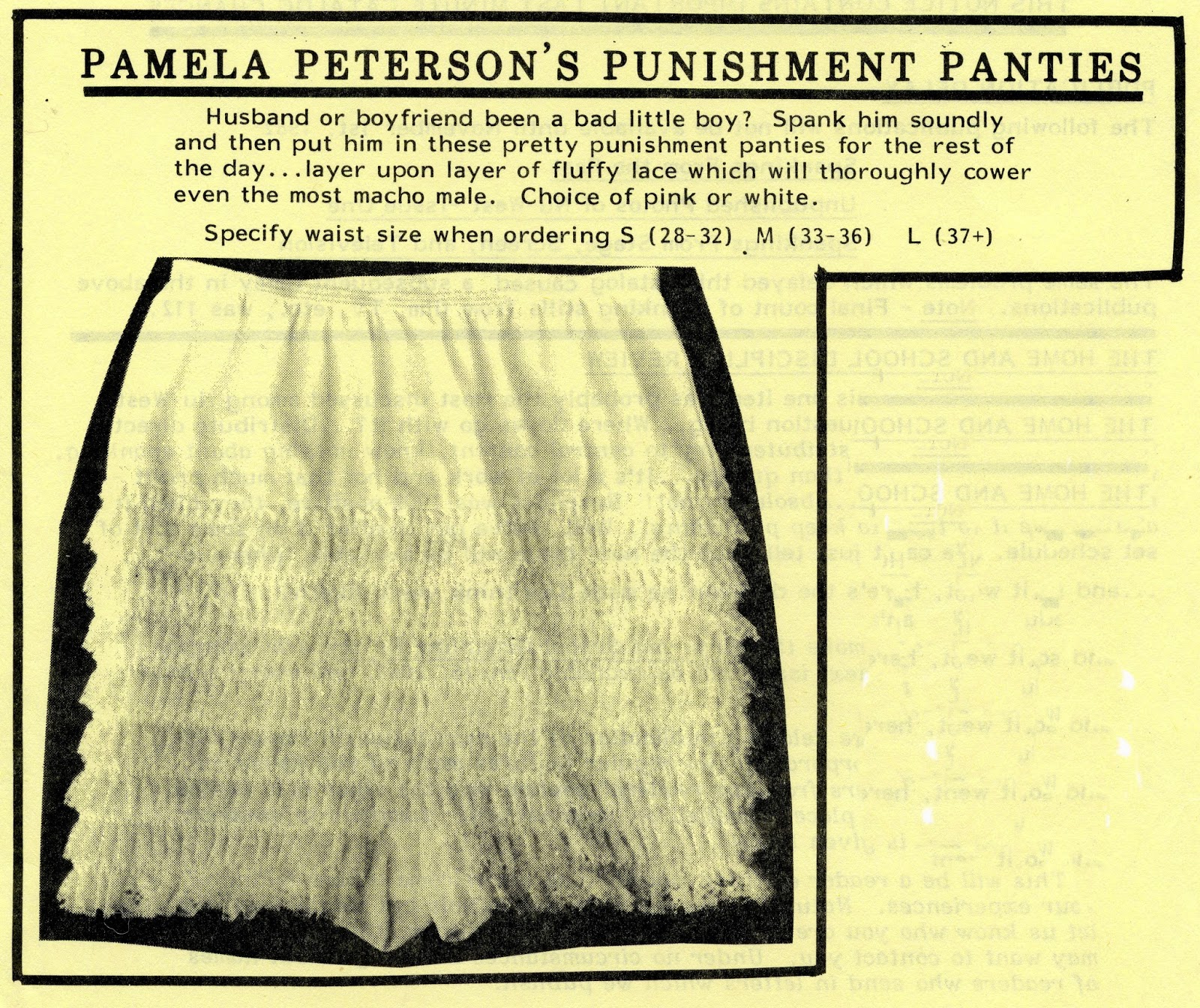 So I pulled my copy of the Complete Guide and read it once again.  It is a fascinating document to read and describes in great detail both Petticoat Punishment and how a woman should (or at least could) establish her dominance over her man.  The introduction indicated that Petticoat Punishment originated in the UK and Europe when many families employed 'Governesses' to look after the children.  It was when a popular instrument of correction was the rattan cane.  However as the book states, "A wise governess soon learned that using a can on some young boys only made them a hero in the eyes of the other children."  It seems that some of the more knowledgeable governesses would make some of their naughty male charges wear girls clothing for a period of time.  "The idea was that a young gentleman who had to attend tea dressed in satin slippers, white silk hose, petticoats, and a dress certainly would not feel like a hero." Thus the term 'Petticoat Punishment'.  The Complete Guide further states, "Perhaps after tea the governess would continue his punishment by placing him over her lap, baring his bottom and administering a sound spanking with a hairbrush. The other children, hearing the cries and pleas of the victim and witnessing the colorful effect of the paddling certainly had no desire to experience the same treatment themselves."

So I hope that explains Petticoat Punishment and a bit of its origins.  The book goes on to explain how a wife could 'Petticoat' her husband.  The recommendations are for at least three 'uniforms': one for the 'Serving Maid', another for the 'Working Maid' and finally the 'Punishment Uniform'.  There are also plenty of references on how to apply discipline, recommendations on spanking implements and even positions such as the classic Over-the-Knee and 'bend over and grab your ankles'.  In addition there are precautions on the application of corporal punishment but also, "A dose of corporal punishment should have dual effect.  It should be extremely painful while it is being applied and the area it was applied to should remain very tender for a period of time afterwards.  This tenderness serves as a lasting reminder of both the offense and the corrective action".

On the last page some conclusions are made including: "Domestic discipline as I have described it here is probably practiced in many more homes than you and I would ever guess".  "Always remember the key traits of a dominant woman.  She is firm but fair, strict, demanding, aloof and unyielding".  "And above all when that bare bottom is turned upside down across your knee waiting for the paddle or hairbrush don't disappoint him.  When you let him up his eyes should be wet with tears, his knees should be quivering and his bottom should be blistered- and I do mean blistered!"

I don't think I could have said it better!  Even though we have been promoting these ideas for several years now.  Note especially the words, "don't disappoint him" above.  When we boys are naughty we do want to be held accountable and suffer the consequences.  Its how we submissive men know we are both forgiven and loved.


Posted by spankedbywife at 8:25 PM 8 comments:

Notice of Discipline Form and Lots of Contacts

Like many of you, I'm a member of the FetLife site.  And have been for quite a long time.  And naturally I 'subscribe' to several of the FetLife 'groups' that pertain to the FLR lifestyle along with a few that just address women spanking men.  A recent post appeared in the 'F/M Spanking' group indicating that the poster had seen a notice for discipline on a blog.  Naturally I wondered if what the poster was referring to was the one we created several years ago.

So I posted a copy to my profile on FetLife and sure enough, it was the one he was looking for.  So now he has a copy and is looking forward to sharing it with some of his spanking female friends.  He has promised to let me know how things work out using the forms in their 'role play'.  I hope to share some of the results if he grants me permission. 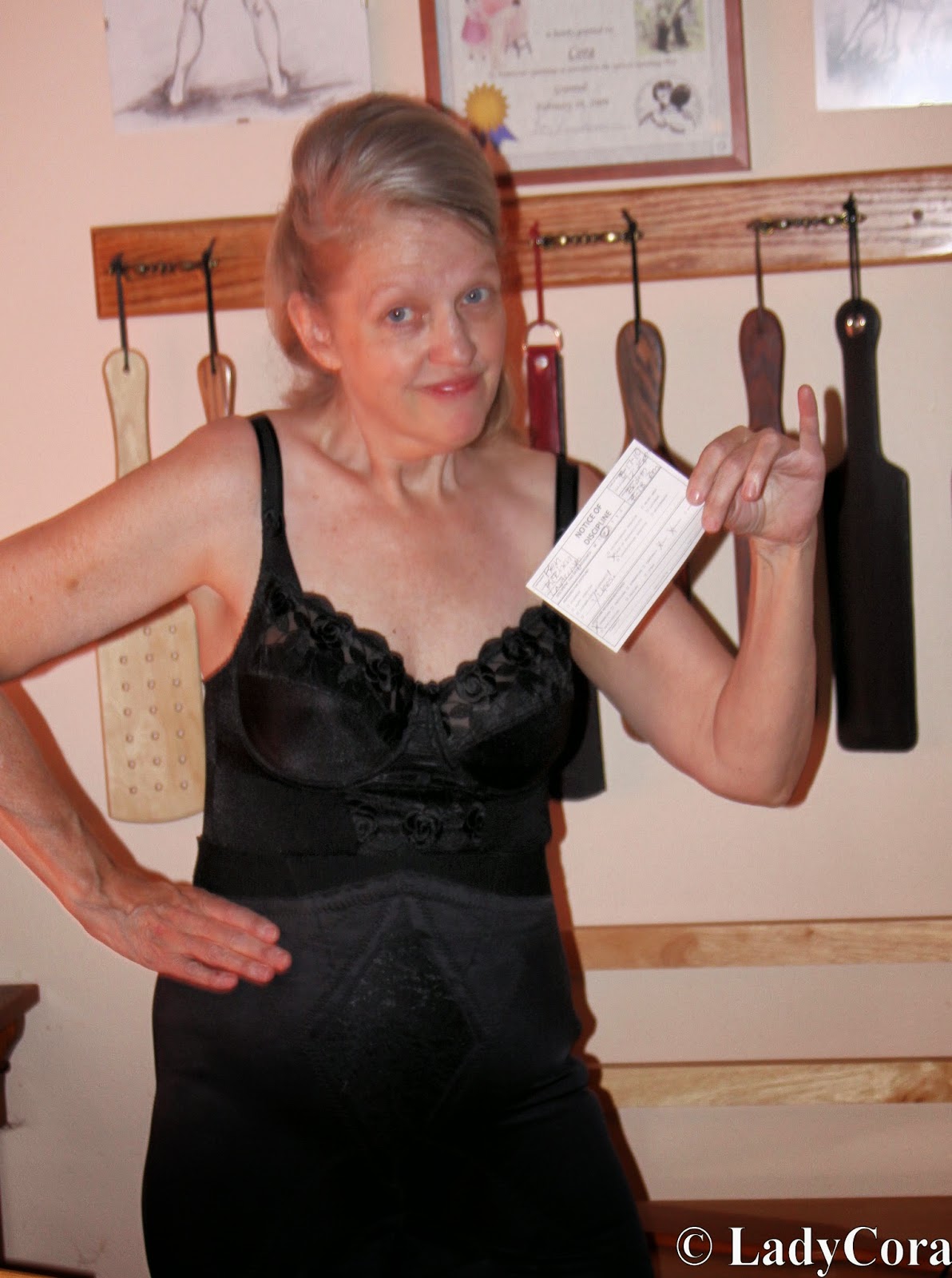 And my offer still stands.  If you read this and would like a copy, you will need to contact me via e-Mail so that I can send you the file.  These forms are in Microsoft Word format and I am unable to post these files here.  But I have sent many copies to those who have requested them.  I haven't kept track but there are probably well over a hundred forms out there in the universe.  You can find our e-Mail address by clicking on my 'profile' icon which appears near the top of our blog in the right column.

And another result of my membership on FetLife is that I have received contacts from several other guys like me who have an interest in Female Led Relationships and getting spanked by the Ladies in our lives.  Most of those making contact are familiar with our blog.  Its been very gratifying to hear from these kindred spirits as making contact with others has been one of the hoped expectations from our blog.

This weekend I have been involved with helping to teach a class.  Its something totally unrelated to our FLR stuff but it was very successful.  So I'm looking forward to spending some quality time over Cora's lap.  Last Wednesday while shopping out and about, we found another stool that will become Cora's new official 'Spanking Chair'.  We found that the first one was a little too tall and both Cora and I found it to not be as comfortable as we wanted.  The new one is shorter and we both really like it.  Its made of solid teak and its just plain 'gorgeous'.  After bringing it home, Cora couldn't resist trying it out.  So once she was sitting on it, I couldn't resist hopping over her lap.  Naturally Cora couldn't resist spanking me with her new Ebony Hairbrush (yes, we have yet another Ebony Hairbrush). This was repeated no less than three addition times on Wednesday and a couple of times on Thursday and Friday.  We plan on doing some photography soon and will be posting about it.  UPDATE: I just now (Monday) got my bottom burned again.  Cora must have delivered a hundred from her Ebony Hairbrush which resulted in quite the reddened bottom.   :-) 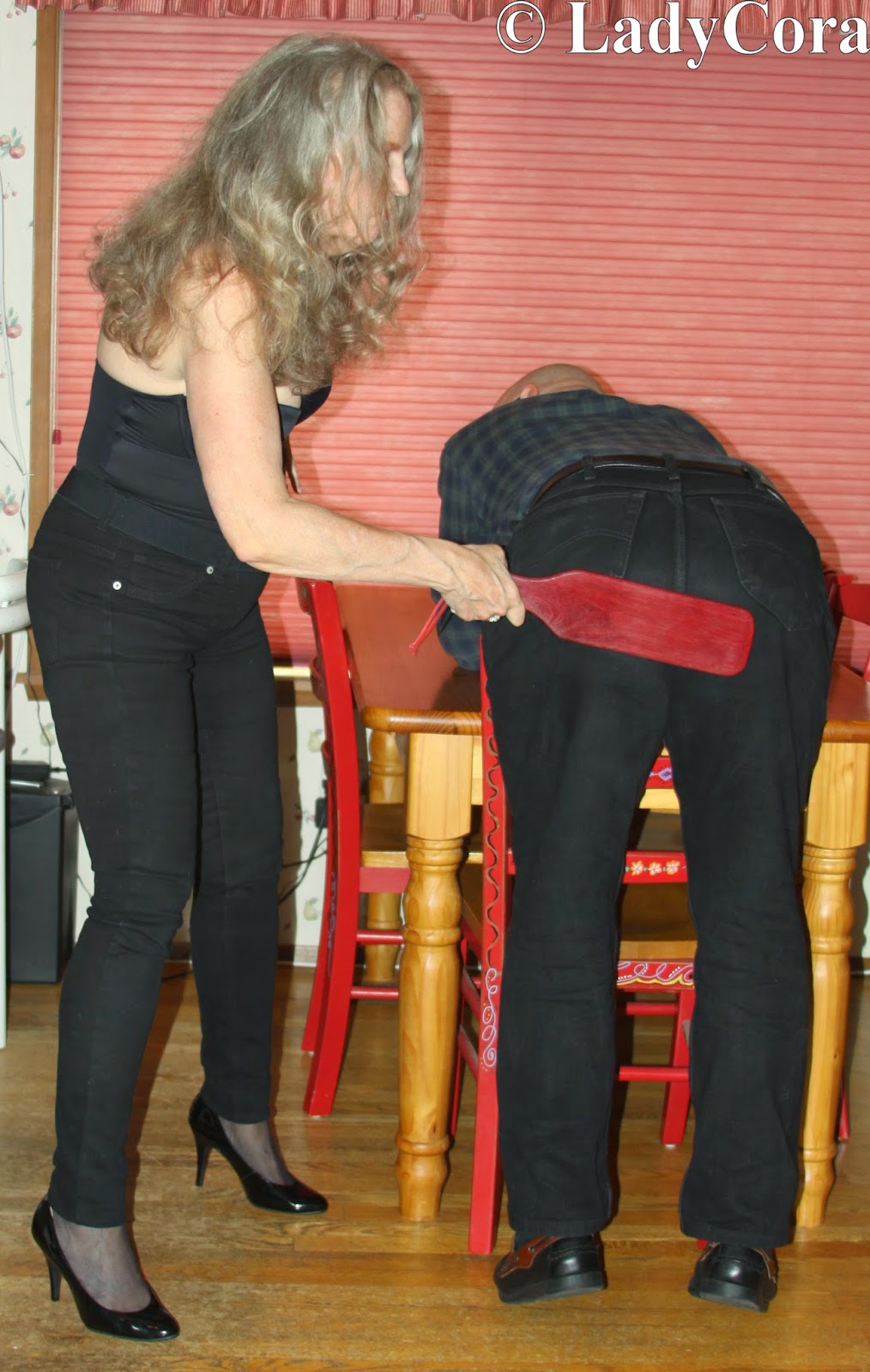 Oh, and a while back I wrote a story.  Guess what!  It got published!  Its on 'The Library of Spanking Fiction', my favorite story site (there's a link here on our blog- look on the right side column).  It was published on April 28.  Its titled, "Spats or Sentences" and describes a fantasy I have always had about getting a paddling in fifth grade.  I have no way to go back and change things so I wrote the story.  I also hope to engage Cora in a re-creation of my story where she fills the role of my fifth grade teacher.  I'm betting that she can more that do a good job! 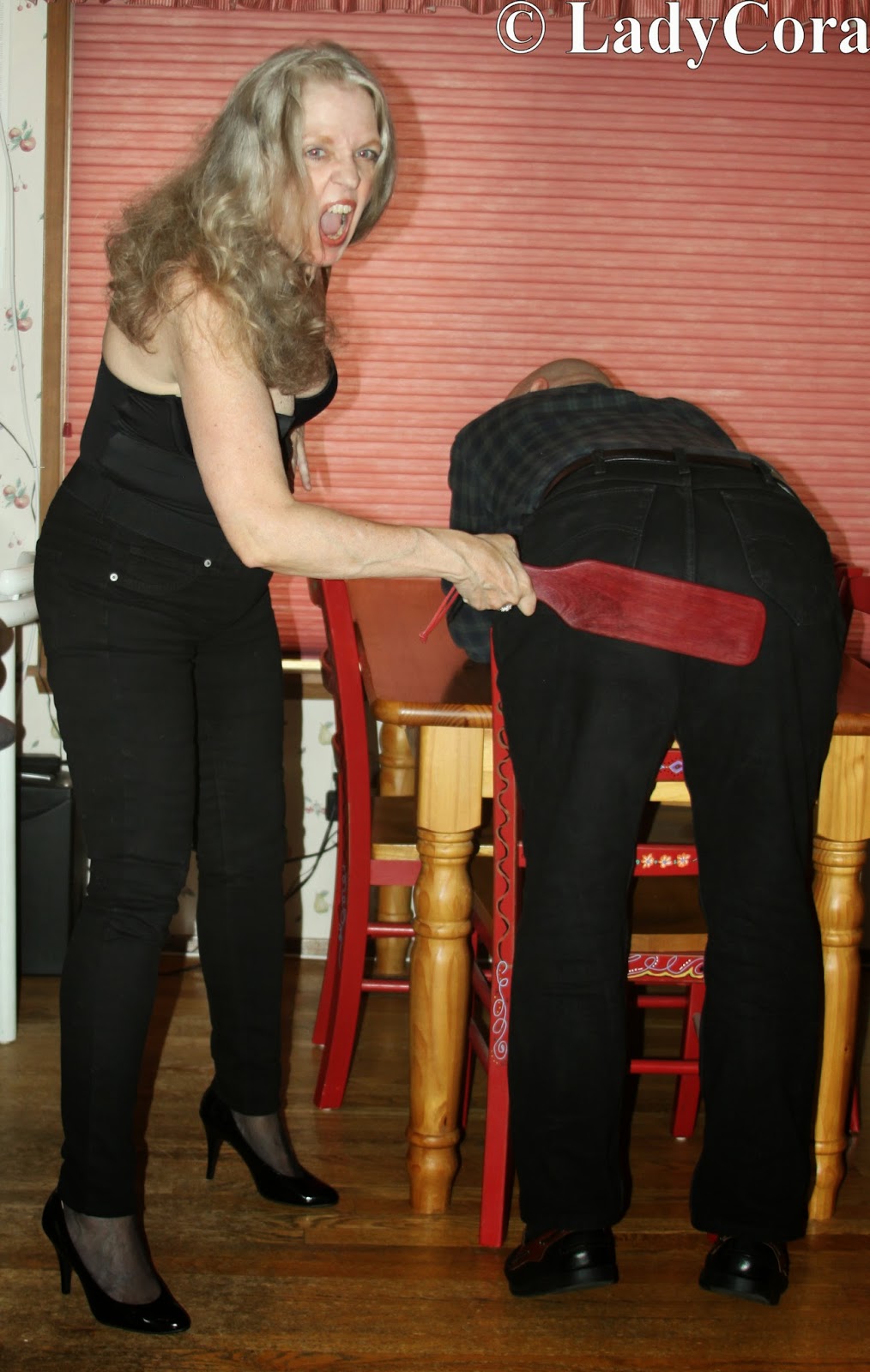 Posted by spankedbywife at 12:35 PM 5 comments:

At least that's what one of our commentors said about Ms. Cora.

Its been a while since our last post.  I've been fighting the affects of a virus since early May and only lately have felt like I'm rid of it.  Yuk!  And there have been some things that I wanted to share with everyone like Cora's new Ebony Hairbrush (yes, yet another and its a doozy!), the story I have published on the Library of Spanking Fiction and a few other things.  I plan to post more about these soon.

However, even though I haven't kept up very well, at least some of you keep reading.  And just this morning my e-Mail in-box treated me with a comment.  It is from 'June' who is the female half of another Female Led Relationship.  It touched both Cora and I.  Here is what she said:

Dear Lady Cora, Loved your recent maintenance spanking videos, especially the closing credits to part one when we can hear the hairbrush being administered while the lovely still picture of you looking TOTALLY IN CONTROL appears on the screen. You are my FLR HERO and as a result, Jonathan now receives weekly Wednesday maintenance hairbrush spankings as well. Thank you for being an INSPIRATION!!! June

I can't express how much June's comments touched us.  Ever since we started this blog, we have hoped to inspire women to take charge of their relationships and to discover the joys and benefits from the application of discipline to the guys in their lives.  It appears that Ms. June has done just that.  Wow!

And since its Wednesday I am way overdue for my own maintenance spanking.  I hope that Ms. June's kind words help inspire Ms. Cora to later take me over her knee and apply her new Ebony Hairbrush to my very needy backside.  I'll be thinking that perhaps Jonathan will be getting the same from Ms. June. 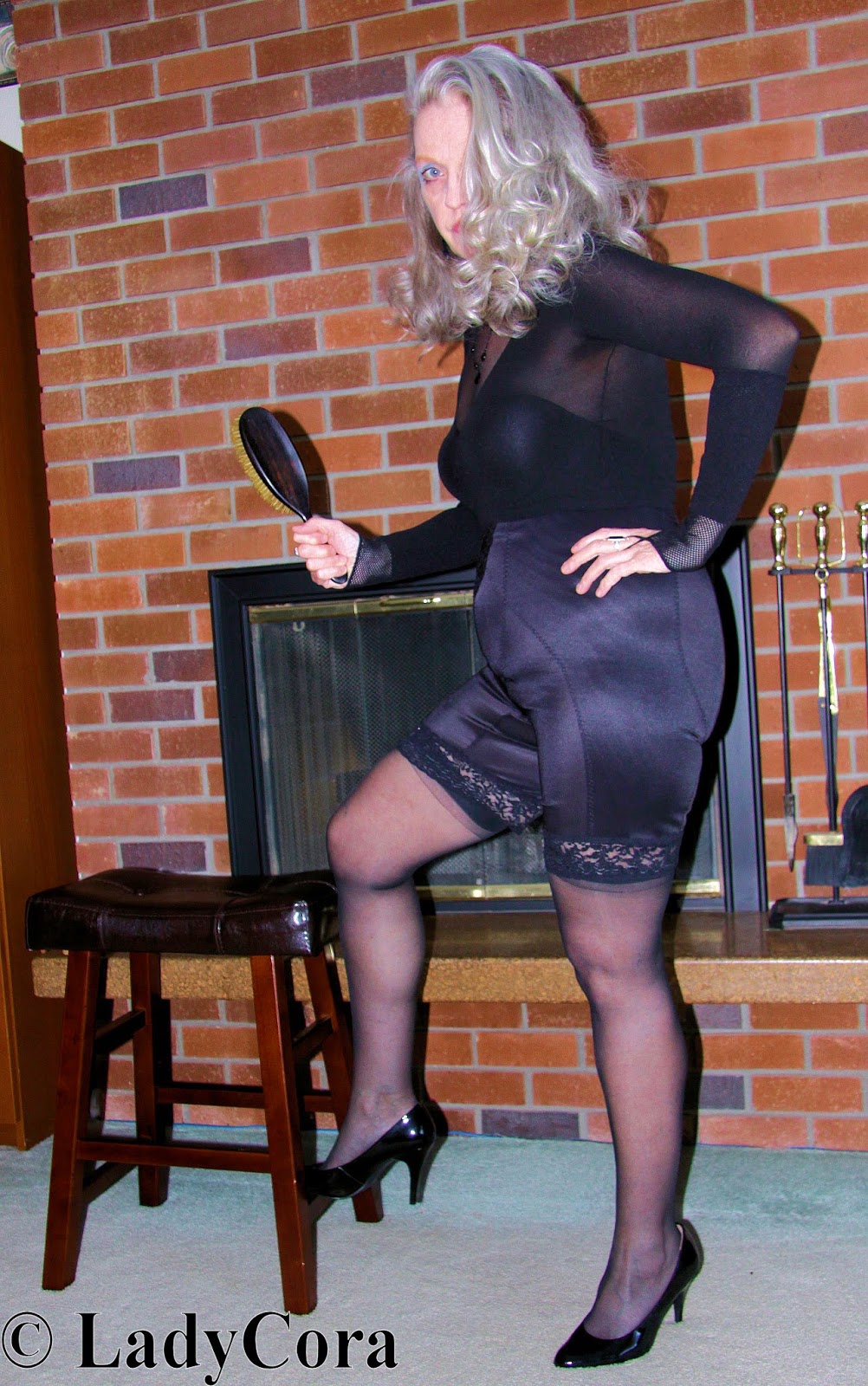 So, Ms. June:  If you read this please let us know more.  We'd love to hear how you found us, how you adopted your Female Led Relationship and how you spank your lucky guy.  Feel free to leave a comment or contact us direct (e-Mail for us is available just by clicking on our profile under 'About Us').
Posted by spankedbywife at 1:00 PM 2 comments: