A little over a month ago James' blog, 'SpankedMale' mentioned a new FLR blog, 'Strict Mia and Blazingbottom's Spanking Blog'.  Naturally I checked it out.

What I found was a wonderful new blog that described a couple who are relatively new to the scene. In their early posts they describe their relationship as one in which the fire had gone out.  Then they introduced the Female Led Relationship style along with spankings, and it appears everything changed.  For the better.

In one of their early posts, 'The power of being in control and the satisfaction of a compliant husband!', Ms. Mia describes many of the benefits she received from adopting a Female Led Relationship:

"1. I could express my feelings.


2. I could vent my frustration.


3. I could discipline his bad behavior.


4. His submission made me love him and forgive him.


5. It clears junk and lets us start a new slate.


6. It lets me offer him nurturing love with aftercare.


7. It releases my anxiety.


8. It makes him mindful of messing up.

Indeed, Ms. Mia has very eloquently expressed the benefits that a woman can gain from a FLR.  The very benefits that other men have tried to use in getting their wives convinced of engaging in their own FLR.  Some with success, some without.

I won't re-tell Ms. Mia's and BlazingBottom's story as their blog does a really great job of describing their relationship.  But I would recommend a look at their blog (the link is in the 'Blogs We Follow' section).  They do their own photography and the pictures speak for themselves. 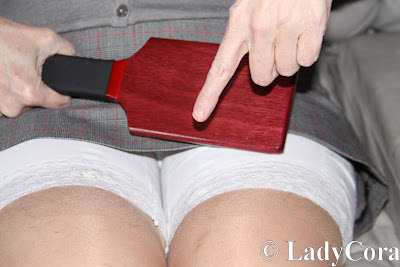 Ms. Mia and Cora seem to have several things in common.  Pictured above is Cora holding her 'Bottom Burner', which is similar to one of Ms. Mia's.  And like Cora, Ms. Mia also has an extensive 'rack' of her spanking tools.  In her case its attached to the inside of one of their closet doors. 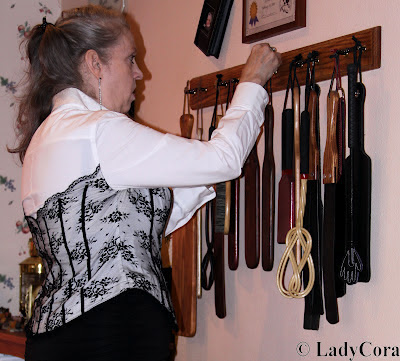 And, in a recent post, Ms. Mia refers to her 'Purse Paddle'. Funny, but a while back I made a Purse Paddle for Cora. Its made out of stock left over from her PurpleHeart Paddle.  Its only 8 inches long but has a similar impact as one of her larger hairbrushes.  I can personally testify to its effectiveness.  And Cora loves to pull it out of her purse to show it off to other women. 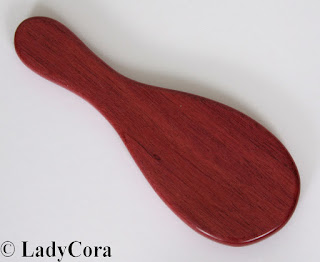 One of the blogs that inspired us to enter the blog-o-sphere was 'Spanking My Husband' hosted by Ms. Deirdre and Evan.  They hadn't posted for almost a year.  But they're back now and have posted several times in the last few days. Its really great to see Evan's bottom reddened by Ms. Deirdre's paddles and we look forward to seeing more.

And finally, James (SpankedMale blog) has perfected getting his videos posted on his blog.  I know how difficult it is to figure out all the details to get a video posted from my own experience.  James and I have corresponded several times about the process and he didn't give up.  The result is a video that can be accessed from his blog.  If you check it out, don't forget to click the 'HD' button as the High Definition version is awesome.  It looks great even in full screen.  And it starts out with a very sexy view of his wife's lap including a great view of her stocking tops.  Of course you know of my love for that kind of view. 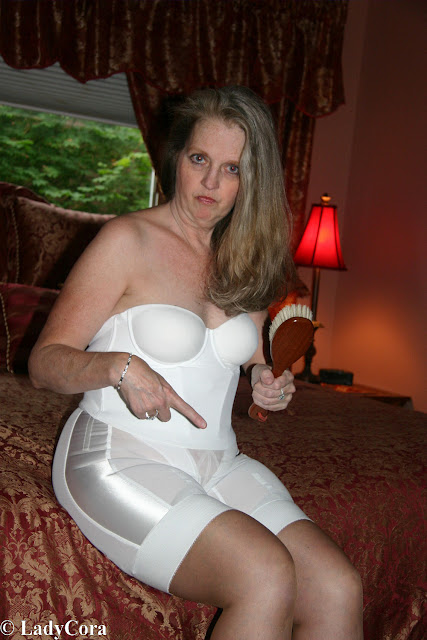 As for us, well Sunday evening I exhibited a bit of bad behavior.  I was working on a computer project and became rather frustrated.  I guess I sort of stormed off in a rage and Cora took exception.  Probably rightly so.  She confronted me a little later and told me that my attitude was unacceptable and that Monday morning would find me at the mercy of her discipline.  Well, its Tuesday and I am wondering if she forgot.  Probably not.  I am guessing that the scene below will be repeated.  Soon. 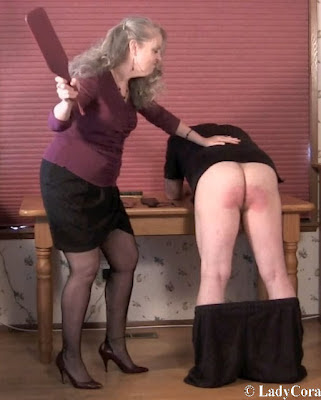 Posted by spankedbywife at 12:15 PM 6 comments: