Got Married, Got Spanked

I am guessing that many of you who read our blog probably thought that Cora and I have been married.  Well, we have been in a loving, committed relationship for over seven years but not married, at least in the 'legal' sense.  Those of you who have gone through the process of dissolving a marriage know that the forces behind the concept of 'marriage' really involve the legal arena with lots of contributions from things financial.  So for us, things had been advantageous for both of us to remain single.  At least until the first of this year.

At that time we decided that marriage made financial and legal sense and proceeded with the process.  At first I think both of us thought that getting married would be 'no big deal', just paperwork and such.  I must say that we were really wrong.  Getting married turned out to be an incredible adventure and lots of fun.

Once the decision to get married was made, there were lots of things to take care of.  Marriage License, who would perform the ceremony, who would we find to be our witnesses (two required in our state) and how would we handle the details of the ceremony.

Naturally, I thought I'd like to combine the concepts of our Female Led Relationship into our ceremony and emphasize Feminine Power and Cora's authority in our vows.  I shared some ideas with Karina and she incorporated them into her ceremony and enhanced it with much of her own input.  She even checked out our blog and did further research into the FLR thing we do.  She certainly went above and beyond and created the most spectacular wedding ceremony both Cora and I have ever seen.  We set Friday, January 18, 2013 to be 'Our Day'. 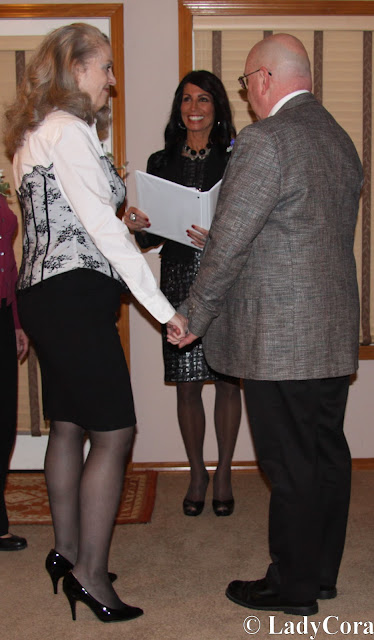 The ceremony began in a traditional manner but Karina always spoke of 'Wife and Husband'.  Cora and I both noticed that right away. 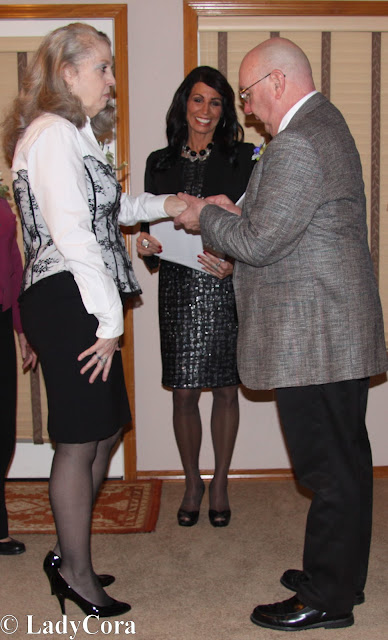 Needless to say, her words touched both of us deeply.  Very deeply.

Following the pronouncement of becoming 'Wife and husband', Karina indicated that I could kiss my beautiful bride. Which of course I did. Both our hearts were singing. 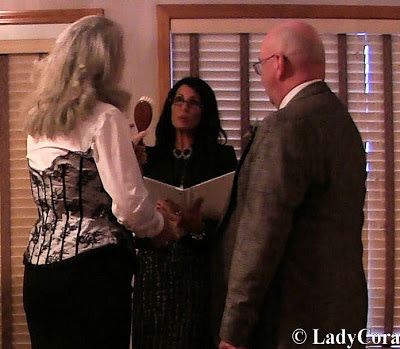 After my first kiss of my new Wife, Karina continued, "And Cora, I now hand to you this hairbrush, that perhaps represents one of the ultimate symbols of feminine authority."  (And yes, the previous post was meant to set this up!).  "In doing so, I pass to you Woman-to-Woman the authorization to begin the initial consummation of your marriage to administer the first spanking to your husband as his Wife and disciplinarian.  You may begin". 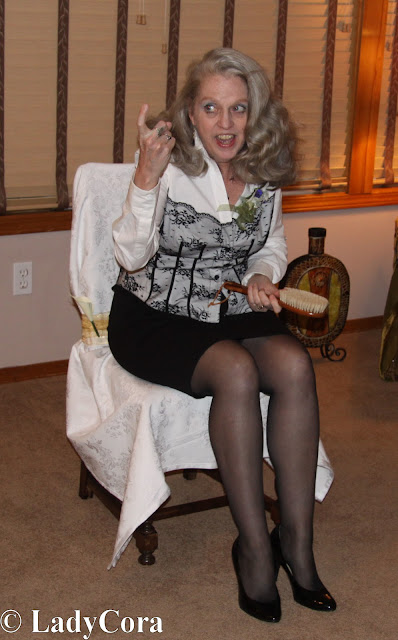 To be continued.
Posted by spankedbywife at 12:57 PM

hearty congratulations. sounds like it was a wonderful ceremony. best wishes for a long , healthy and happy life together. did you actually spank him at her house or did it wait until you got back to your hotel. gtota say it again. wonderful ceremony.

Who says spanking is not mainstream? This is great. Our best to you both.

Congratulations to both of you, hope you have many years of spanking bliss!!

I can't think of a nicer couple to take the plunge. We're happy for both of you.

Congratulations to the two of you.

Congratulations! When I embarked on my second marriage, J. had already been spanking me for some time - if only because, as a close friend of my (late) first wife, she had already watched me a few times being paddled or whipped by N. and promptly decided to resume the sort of discipline which she knew I needed (and was used to)

Congratulations! When david and I got married, it was a very different relationship than it is now, and I would love to do what you guys had the courage to do.

Congratulations, Cora and ken! May you have many years of marital bliss, plus lots of blisterings for ken. Now about the lovely Karina, who officiated at your wedding: is such a kindred spirit unattached?-Gene, Trueseek50@yahoo.com

How wonderful, congratulations my friends, just amazing story, so happy for you both....and wow, another inspiring stage of your life....your minister is also inspiring, I too want to know if Cora spanked you there and when you got back?
Just wonderful
Always with respect
Ron